With summer just around the corner, I’m dreaming of days by the pool reading and soaking up the vitamin D.  While I typically opt for the easy-to-read young adult dystopian novels (yes, I am a teenage girl, apparently), I’m also excited about the health books I have on my reading list.  For those of you looking for some non-fiction book ideas,  here are a few old favorites on my bookshelf or ones that I am currently reading (and will be writing about very soon)!

– This book changed the way I think about food and my health and was the ultimate inspiration for this blog.

could provide.  Read my summary here.

Your Body’s Many Cries for Water

– Wow… if anything will convince you how important it is to drink water, it’s this book.  You’ll be surprised how many health problems are a simple result of chronic dehydration – read more in this blog post.

Why We Get Fat: And What to Do About It

– A controversial read that attempts to debunk the calories-in, calories-out theory. Read my review here.

– Would you ever eat charcoal?  Read about why charcoal is now a staple in my medicine cabinet here.

It Starts With Food: Discover the Whole30 and Change Your Life in Unexpected Ways

– I’m halfway through this book and planning to do the Whole30 “diet” this summer… I’ll let you know how it goes!

Healing Oils of the Bible

– Just started this book and I am already so inspired.  If you are theologically-minded and want to learn more about scriptural healing, this is a must-read.

Nourishing Wisdom: A Mind-Body Approach to Nutrition and Well-Being

– One of the hardest things about the transition to a healthy diet has been self-control and our relationship with “good” and “bad” food.  I’m interested to read the author’s take on how we eat being just as important as what we eat.

– Not really a sit-down and read kind of book, but if you have essential oils, I promise you can’t live without it.  Organized by symptom, you can figure out how to use oils to promote healing.

The Holistic Dog Book: Canine Care for the 21st Century

– I’ve always been intentional about feeding my dog the best food and making holistic medical choices for her, but after she got really sick a few weeks ago, I’m more motivated than ever to make sure she has the chance for optimal health.  This book is going to help me make the transition to a raw food diet.  I will certainly share what I learn soon for all you dog-lovers out there. 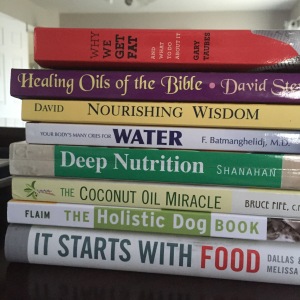 Which one of the these books interests you the most?  What are your favorite health & wellness must-reads that I missed?

*The book links above are affiliate links, which means I make a very small commission if you purchase that product.  I sincerely appreciate your support to keep this blog going!

Yesterday, I shared part 1 of my review on Gary Taubes’  book, Why We Get Fat: And What to Do About It

. His arguments really hit home with me, and I’m sure did with a few of you as well.  So, naturally, the next step after realizing why we are getting fat is figuring out what to do about it.  “Not all of us get fat when we eat carbohydrates, but for those of us who do get fat, the carbohydrates are to blame; the fewer carbohydrates we eat, the leaner we will be.”  It’s frustratingly beyond our control if we are predisposed to get fat, but at least there’s a solution.

Not all carbs are the same…  Leafy green veggies have lots of fiber that take a while to digest and therefore the carbs don’t cause blood sugar levels to spike.  But, cheap carbs, like bread, pasta, potatoes, rice, beer, soda, and all processed foods, have highly concentrated amounts of carbohydrates and are easy to digest. That means the glucose quickly enters our bloodstream, causing blood sugar to spike and with that insulin levels to go up.  Fruit, while not as carb-concentrated, is easy to digest and therefore might have a fattening effect on the most insulin resistant people.  The worst effect comes from a diet filled with fructose and highly sweetened food items. Our livers are not designed to handle the sugar overload and respond by turning it directly into fat. So when fructose is consumed with glucose (all those yummy processed foods/cheap carbs), insulin levels rise and start storing all that fat away instantly. It hastens the effect of carbs.  This explains why some carb-heavy cultural diets, like in Asian countries where rice is a staple, don’t have a fattening effect: because they also eat traditionally very little, if any, sugar and have otherwise healthy, lean diets of fish and veggies.

We’re addicts.  The more insulin resistant we become, the more insulin that’s constantly flowing through our bloodstream, craving a quick fix of glucose for fuel; that’s why we constantly crave those carbs even when we try to eat healthy and feel truly full on meat and veggies.  The solution is as radical as breaking an addiction: eliminating those cheap carbs completely to break the habit.  This is why many on the paleo diet are so successful in losing weight over many vegetarians/vegans, who often supplement their plant-based diet with carbohydrates.  Paleos are eating the way our ancestors did as hunter-gatherers – high protein & fat from meat and lots of wild plant foods that are low in carbs and low on the glycemic index.  Ultimately, Taubes suggests consuming fewer than 20 grams of carbohydrates per day and eliminating sugar completely to correct your weight. Beyond the benefits of losing weight, you will also find that your body starts healing itself naturally (the way God designed it to), since sugar actually suppresses your immune system for hours every time you consume it. Order his book here

If all of this text has been a little overwhelming for you visual people, here is an awesome infographic that explains most of what I’ve summarized from his book.  Enjoy!

[Source: Carbs Are Killing You]

So what do you think of Taubes’ argument?  Will you read his book? Will you go carb & sugar free?

“We get fat, our physicians tell us, because we eat too much and/or move too little, and so the cure is to do the opposite.” – Michael Pollan, In Defense of Food

When my husband and I are planning a date night out to a really great restaurant and want to eat as much delicious food as possible, we often eat a light lunch or do something active to make ourselves hungrier for the big meal. But wait, that’s also what I’m told to do to lose weight…. Something’s wrong with this reasoning.

In his book, Why We Get Fat: And What to Do About It

, Gary Taubes tackles this cultural mindset of “calories in, calories out,” turning it on it’s head and calling into question a principle we’ve always held to be true. It’s a fascinating read, with lots of really compelling cultural case studies and the scientific details in layman’s terms that help you to understand his argument.   I have a bad habit of reading the Appendix of a book first and will admit that I was disappointed with some of the diet recommendations he makes – in particular, okaying alternative sweeteners like Splenda and Nutrasweet and diet soda; but, I had a long plane flight ahead of me and nothing else to read so I kept on.  I’m glad I endured because there are definitely some great nuggets of information I got from this book:

Obesity has become an epidemic.  1 in every 3 Americans are considered obese compared to only 1 in 9 fifty years ago. I’ll admit that I used to think that most people get fat by simply being lazy and/or eating too much junk food.  But, a case study of many areas of poverty shows that there are many who are malnourished (less calories in), work manual labor (more calories out), and who are still obese or overweight.  And in research studies, hormone-manipulated rats proved that they immediately began to overeat, become sedentary and quickly grew obese; even when completely deprived of food, forced to diet or forced to exercise, the rats retained their fat while their organs deteriorated.  There must be some other determining factor than being slothful and gluttonous…. it seems more to do with genes and hormones than simply overeating.  The answer lies within the fundamental definition of obesity- “a disorder of excess fat accumulation.”

Taubes relates fat tissue to a wallet: “you’re always putting fat into it and always taking fat out.”  But only certain forms of fat can go in and out, while others go in and stay. When fatty acids enter a fat cell, they join up with a glycerol molecule and two other fatty acids to become a triglyceride. Triglycerides are too big to go back out of the cell membrane, so they stay captive until they can be disassembled.  The hormone that works to create triglycerides is insulin.  Insulin works through the LPL enzyme and the HSL enzyme.  The LPL enzyme sends fatty acids into the cells for energy. When we exercise, LPLs trigger the release of fat from fat tissue and send those into muscle cells to burn off.  (As soon as we stop, though, LPLs work to help fat cells regain that fatty fuel, which is why Taubes claims exercise doesn’t make us lose fat, just gains us muscle.) The rest of the time, insulin triggers LPLs to send fatty acids into fat cells and tells muscle cells to burn blood sugar rather than fatty acids, so insulin basically keeps these fatty acids in your fat cells.  Insulin also suppresses the HSL enzyme, which is the enzyme that breaks down the triglycerides into fatty acids to move out of the fat cells.  And when our fat cells get full, insulin creates new ones… working constantly to make us fatter… it’s no wonder that so many diabetics that start insulin therapy gain so much weight.  Further, every other hormone in our body works to release fat from our fat tissues so that it can provide fuel for what it needs to do, but “insulin trumps the effects of other hormones.”  And as we get fatter, our demand for more fuel increases, which causes our appetite (especially for carbs) to increase. So, to lose fat, we must lower our insulin levels.  The way to do that is to diminish the cause for insulin secretion – carbohydrates.

Okay, but I eat healthy and I still struggle to lose weight, while I watch others eat fast food daily and stay super slim… frustrating, isn’t it? One reason is that “some people will secrete more insulin than others, and those who do are likely to put on more fat and have less energy.”  The other reason is that many of us have become insulin resistant. Eventually, your cells stop wanting all the glucose you’re putting in your body, and they start making insulin’s job harder to get it out of the bloodstream, which results in you secreting even more of it.  Everyone’s tissues react differently: if your muscle tissue is really sensitive to insulin, then you’ll use up more glucose in those cells, making you naturally lean, but if your fat cells are more sensitive, then glucose will go there instead and you’ll become overweight. And as we age, our muscles naturally become more resistant to insulin, which explains why we tend to get fatter as we get older.  Most importantly, this doesn’t just affect us, but our children too.. “the higher the level of a mother’s blood sugar, the more glucose her child gets in her womb” and therefore will be born with more fat and predisposition to be insulin resistant.

At this point in the book, he had my attention… is this resounding with you as well?  Tune in tomorrow for … And What To Do About It.